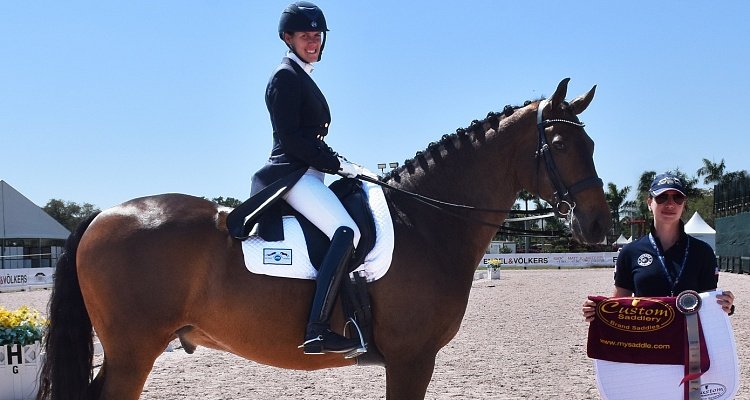 Wellington, FL (March 28, 2017) — Each week of the 2017 Adequan Global Dressage Festival, Custom Saddlery has presented its Most Valuable Rider (MVR) Award to a deserving equestrian who contributes to the quality and success of the iconic show series and to the dressage community in general. The final award of the season was presented to FEI Grand Prix rider and trainer Olivia LaGoy-Weltz, who competed in the series’ CDI circuit with her own Lonoir (De Noir x Lorani), a 2004 Danish Warmblood gelding. LaGoy-Weltz, a USDF Gold, Silver, and Bronze Medalist based out of northern Virginia and Wellington, Florida, represented the U.S. during the Stillpoint Farm FEI Nations Cup™ CDIO 3* in the final week of the 2017 Adequan Global Dressage Festival.

Custom Saddlery, manufacturer of world-class saddles and accessories, named LaGoy-Weltz a Most Valuable Rider in recognition of her excellent rides this past week in addition to her overall dedication to the sport and her success in bringing her own horses through the levels of dressage. LaGoy-Weltz, who grew up in the San Francisco Bay area, began riding at age five. Now a highly respected equestrian professional in the U.S., her experience includes several years of training with Egbert Kraak in Europe, where she also worked for some of the top barns in Holland and Germany. She established successful dressage businesses in the San Francisco Bay area and again in Lexington, Kentucky before moving to Northern Virginia in 2013. Now based out of Mountain Crest Farm in Haymarket, Virginia year-round and Florida in the winters, LaGoy-Weltz provides FEI-level dressage training in both locations.

LaGoy-Weltz took a lucky chance on Lonoir – or Lono, as he is called in the barn – when she selected him as a “project-horse” six years ago. “Lono had a little baggage from a previous life that caused trust issues, and that has taken quite a few years to work through, but I think he’s really there now,” she said. “He’s just so relaxed now – even our trainer, Debbie McDonald, says that he seems like a different horse.”

The victories were all the more special for LaGoy-Weltz, as she was representing not only herself but also the U.S. Nations Cup team. “I feel like I’m always a bit more nervous when I ride for the team, because other people are relying on me, and it’s not just me and my horse,” said LaGoy-Weltz. “I feel a bit more pressure because I want to do well for the team. I think it is always a good experience to participate in this kind of event and to learn how to not let that get to you, so that hopefully when you get to the big-time competition, you’ll have more experience with that kind of pressure.”

LaGoy-Weltz and Lonoir are currently training for a Nations Cup tour in Europe this summer, and will potentially compete closer to home at the 2017 National Dressage Championships in Gladstone, New Jersey, this May, pending a tour in France.