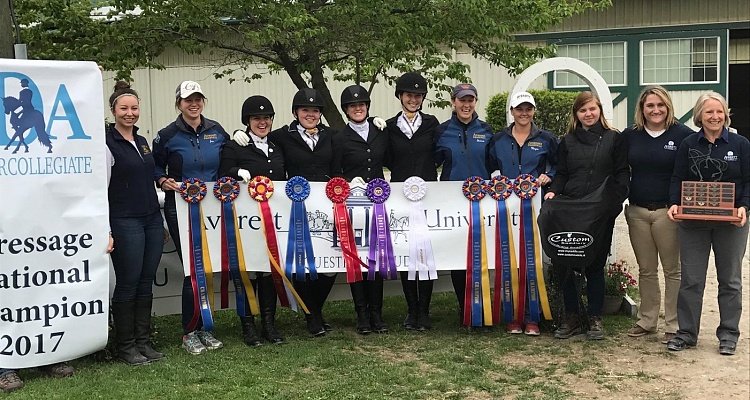 Long Valley, NJ (May 12, 2017) — Four Averett University students will soon be riding in comfortable, fashionable, and superbly crafted new saddles, thanks to Custom Saddlery. As part of the company’s sponsorship of the 2017 Intercollegiate Dressage Association (IDA) National Championships, four Custom Saddlery Signature Steffen’s Advantage saddles are being awarded to the winning team of the competition.

Although the Averett University team has qualified to compete at the IDA National Championships for the past 12 years, seniors Kasey Toth and Hannah Walters and juniors Megan Grimes and Kristen Kelley earned the team’s first victory at the championships this year, under the tutelage of coach Ginger Henderson.

“It was so exciting,” Henderson said of the competition held at Centenary University in New Jersey. Averett’s riders took an early lead. “It was nerve wracking hoping we could hold until the end, but it was thrilling watching these riders perform with such skill. They worked so hard this year and it showed in every test.”

Team member Kasey Toth, who will be graduating with a degree in Equestrian Studies, said, “I will take away two of the best memories of my college career for this competition – winning the national title as a team, and winning a national title for myself, since I placed first in my Upper Training division,” she said. She was also proud of her team. “We were with each other 100 percent of the time. We made sure that we were prepared, focused, and knew what our goal was!”

Megan Grimes, who is studying both business and dressage at Averett, said the anticipation of waiting to learn who won was tough. “The hardest part was not knowing my score or how the team did,” she said. “That part killed me with anticipation.” But then, when the Averett team was proclaimed the winner, “We all went in for a group hug and then the Emory & Henry team (last year’s winners) came in and hugged us as well, and just talked about how proud they were of us. It was an awesome feeling that other teams were just as excited as we were and thought we deserved it.”

Kristen Kelley, an Equine Studies major with an emphasis on eventing and business management, also said the competition was nerve wracking. “The most difficult part was watching all of the Intro riders go and thinking to myself ride after ride, ‘This one could be at the top,’” she said.

She and her teammates enjoyed watching the Custom Saddlery saddle fitting demonstration given by Custom Saddlery’s own professional saddle fitter Candice Ozolins during the competiton. “I felt I learned a lot about saddle fitting that I had never considered, and it's definitely something they should continue doing at the championships,” Kelley said.

Ozolins, who fits saddles in upstate New York and eastern Pennsylvania, enjoyed the event, as she had also competed on a college equestrian team. “I speak at many local barns and colleges whenever the opportunity presents itself,” she said. “These are the future trainers, competitors, and the next generation of professionals in the equine industry. I hope students understand that saddle fitting is an affordable option with numerous benefits that can assist with behavioral issues. Quality of movement, willing and consistent transitions, as well as soundness are all greatly influenced by proper saddle fit.”

Custom Saddlery’s drive to promote proper saddle fit is obvious in the countless customizable models, trees, and sizes of saddles that the company makes. Saddle fitters like Ozolins help horses and riders find the perfect fit.

As a longtime sponsor of the IDA National Championships, Custom Saddlery supports IDA’s mission of helping college students develop their skills in dressage and their appreciation of the sport.

Coach Henderson was thrilled that her team won the saddles. “We have several Custom saddles in our barn, and they are favorites of all our riders. Being able to have their own is truly a gift! The saddles will help all these riders as they move forward in their professional careers. Custom Saddlery is synonymous with excellence when it comes to dressage saddles. To have a sponsor like Custom Saddlery really makes a statement to these riders that what they have achieved is extraordinary!”