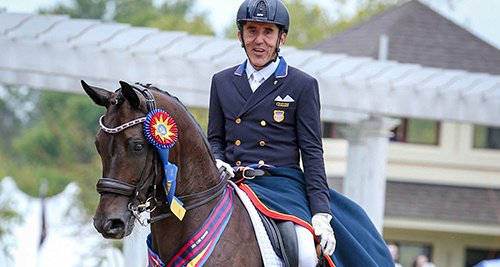 Wayne, IL (August 30, 2017) –  It’s been nothing short of a banner year for Custom Saddlery’s “Most Valuable Riders (MVRs)”. At the Markel/USEF Young & Developing Horse Dressage National Championships held at Lamplight Equestrian Center in Wayne, Illinois many Custom Saddlery MVR’s enjoyed a victory gallop. Leading the charge was MVR and international competitor Dr. Cesar Parra, who rode to the Championship in the Developing Horse Grand Prix Championship riding in his Custom Icon Star Saddle, and fellow MVR and Olympian, Heather Blitz was also in the top five with a fourth place finish riding Danish Warmblood Ripline in her signature Custom Advantage saddle.

Parra competed aboard the highly successful Fashion Designer OLD (Faustinus x Forst-Design, De Niro) and was thrilled with the achievement for the 9-year-old Oldenburg gelding bred by Heike Kind in Germany and owned by Parra with Martin Sosnoff. The pair has consistently accomplished top placings at the annual Championships, finishing in top 3 overall in the Five-Year-Old’s, Six-Year-Old’s, and the Developing Prix St. Georges divisions in previous years. Last year, Parra and Fashion Designer OLD won the Reserve Champion title in the Developing Prix St. Georges division, so winning the Developing Horse Grand Prix this year was the perfect way to top off Fashion Designer’s developing horse career. You can watch video from Dr. Parra’s competition performance at the Grand Prix Dressage National Championship here.

“I’m very proud and thankful to be a part of this horse’s development. He has already achieved so much success- winning in Germany and excelling in the Five-Year-Old, Six-Year-Old, and Developing Prix St. George divisions here at Lamplight. After watching him develop and progress so well through the levels, to reach this accomplishment is so rewarding. And there’s so much more to come- I know he’s capable of even more than we have seen from him so far, and I’m really excited to continue on this path, to continue his development, and see what else he is capable of achieving. There are so many people, both here in the USA and in Europe that have been instrumental in Fashion's success. I am so very grateful,” remarked Parra.

The pair delivered exceptional performances during the competition, impressing judges and earning superior scores to match. Ots was quick to congratulate fellow MVR Cesar Parra on his Grand Prix Championship this year. Ots knows first hand “how sweet that victory is” from his own Developing Horse Grand Prix Championship aboard Bethany Peslars’ Donatus at the 2014 Markel/USEF Young & Developing Horse Dressage National Championships.

Custom Saddlery was pleased to congratulate these riders on their exceptional accomplishments in this year’s Markel/USEF Young & Developing Horse Dressage National Championship. The nationwide team of Custom Saddle fitters knows that the right saddle with the correct tree is crucial to each horse’s comfort and performance. Custom Saddlery offers professional saddle fitting services with expert saddle fitters across the United States and internationally, and manufactures innovative high quality saddles that fit both horse and rider. Find a catalog of Custom saddles and an expert saddle fitter near you at www.mysaddle.com or call 1-800-235-3865.