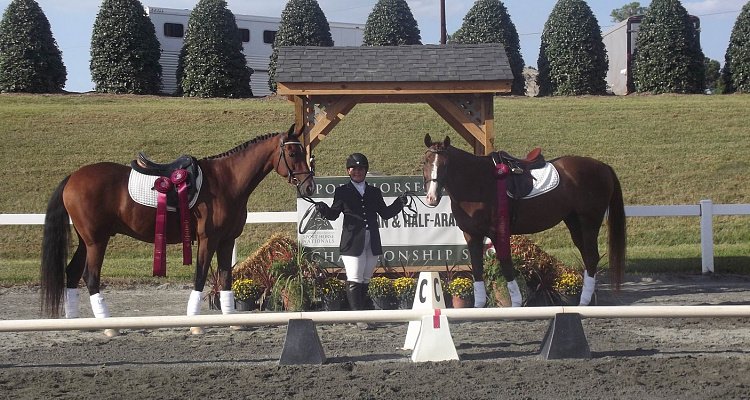 Raleigh, NC (October 11, 2017) — Custom Saddlery, a company known for fitting saddles perfectly to any horse, presents the Most Valuable Rider (MVR) Award to equestrians across the United States who exemplify excellence inside and outside the show ring. This can be by putting forth a superior performance, by earning great test scores, or by demonstrating excellence in training, attitude, and by setting an example for others in the equestrian community. Carla Scarmazzi, the most recent winner of the Custom Saddlery Most Valuable Rider award, was an example of all of these ideals at this year’s Sport Horse National Arabian and Half-Arabian Championship Show in Raleigh, North Carolina.

Scarmazzi, of Beaverdam, Virginia, first competed at Sport Horse Nationals in 2003. This year, she showed her three horses in multiple Dressage classes and had impressive rides with each horse. Rockafellar, a six-year-old Half Arabian/Oldenburg, bred and raised by Scarmazzi, showed in the Half Arabian Training Level Adult Amateur Owner to Ride and Amateur Owner to Ride. In addition, Scarmazzi rode CR Cayenne Pepper, a twelve-year-old Anglo Arabian, and RS Royal Edition, a thirteen-year-old Half Arabian/Dutch, in the first and second level Dressage classes. Both horses came in the Top Ten in each of their classes, and Scarmazzi wrapped up this year’s Nationals with five Top Ten awards between her three horses, making it her most successful Nationals yet.

Showing three horses simultaneously in a competitive arena is no easy feat, but Scarmazzi handled it with style and grace. “It was challenging to have multiple horses and multiple rides in the Dressage arena,” said Scarmazzi. “I had to ride at 8:00 in the morning and then again an hour later because I had two horses in the same class. They were really pleased that I didn’t have any issues with the schedule.”

Despite the hectic schedule of preparing and showing her three horses, Scarmazzi didn’t hesitate when it looked like the show committee could use an extra hand setting up the arena for the Western Dressage. After one of her rides, she put her horse away and hurried back to the arena to help. “Many of my friends show in Western Dressage, so I just wanted to help,” she said.

Scarmazzi’s willingness to help and easy-going attitude combined with her achievements in the show arena truly added to the overall excellence of the show, and Custom Saddlery was proud to present her with the Most Valuable Rider Award. “It’s really nice that Custom Saddlery supports the riders that come to the show with this award,” said Scarmazzi. Of the company, she added, “They’re beautiful saddles, and they put you in a beautiful position.”