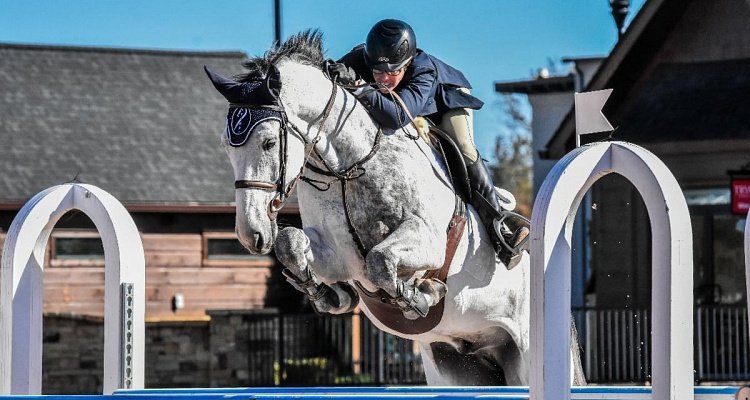 In the $15,000 Jumper Classic hosted Sunday, November 3, Alden piloted the 2009 Warmblood gelding of unknown breeding to a win by stopping the short-course timers in a time of 37.683 seconds and with one rail down. The pair had previously conquered the $5,000 Horseware Ireland Welcome Stake on Friday, November 1, continuing their winning ways at the venue. Second place went to John Angus (Ft. Lauderdale, FL) aboard Stephanie Angus’ W. Tonix Hero, a 2003 Dutch Warmblood gelding (Ogano Sitte x Itaquine de Roll), who stopped the jump-off timers in 39.177 seconds with four faults, while third went to Robert Stucky (Waxhaw, NC) riding Caron Stucky’s Uranus 112, a 2011 Oldenburg gelding (Uccello x Conny), to a first-round score of 75.559 seconds with four faults in the first round.

“This is my first show with him,” Alden revealed of Question de Cour. “I brought him here to see how he would do and get to know him because I have two A shows the next two weeks. I love him! He tries really hard. He gets a little nervous when the course is over, but he tries hard, jumps well, and he’s really careful. He’s jumped some in Europe, but hadn’t done a ton of Grand Prix classes.

“I think it [the course] was perfect for this class,” she detailed. “He [Dean Rheinheimer] does a really good job based on who’s at the horse show and what kind of class it is. I think that it was challenging enough for the horses who were here, without being too hard. It rode really nicely! There were a couple of questions, but not overly difficult.”

As it was her first competition with the gelding, Alden shared that Sunday was also her first jump-off experience with Question de Cour, where she aimed to stay clear, and then to be the fastest four-fault round when the pair knocked a rail:

“It was the first jump-off I’ve done with him. He won the Welcome, but we didn’t have a jump-off, so my strategy was really just to be clear [this time]. He hit the second jump - I think he wasn’t sure that we were going to it - so I knew I had to go a little faster. He’s been great!

“Tryon is one of my favorite places to horse show," emphasized Alden about the venue. “It’s where I won my very first Grand Prix a few years ago, so it’s really fun to win my first one on him here, too. The staff is really nice and accommodating. We love coming here and look forward to coming back!”

In Friday’s $5,000 Horseware Ireland Welcome Stake, Alden and Question de Cour stopped the first-round timers in 72.483 seconds and were the only pair to put in a clear round, guaranteeing them the win without a jump-off. John Angus (Ft. Lauderdale, FL) and Stephanie Angus’ W. Tonix Hero, a 2003 Dutch Warmblood gelding (Ogano Sitte x Itaquine de Roll), knocked one rail and stopped the clock at 62.439 seconds to finish in second, while Alden also claimed third with Andrew Kocher’s Altezza du Jardin, a 2010 Selle Francais mare with unknown breeding, ending on four faults in a time of 73.801 seconds.

It was the first time ever Alden had competed with Question de Cour after he’d been imported from Europe, and day one started with two wins, she detailed. “Today is the first day that I have ever shown him. His owner, Jamie Stryker, imported him from Europe and sent him straight to me. I came here to get to know him before I show him next week at an A show. So far, he’s really fun! He feels like he can jump the big jumps.

“The course was perfect for the horses that were here,” Alden continued. “The in-and-out was a bit tight which is what got Altezza du Jardin, my other mount. I think Dean Rheinheimer does a really nice job.” She concluded, “I didn’t know what to expect with Question de Cour. I did him in a 1.20m class this morning and he won, but I had no idea how he would handle the bigger jumps.”

“This is my third show on him, and he hasn’t shown in about a month,” said Alden of the talented gelding. “I plan to do the four-foot division and the International Derby Raleigh next weekend, so I wanted to bring him down here first. He’s the sweetest horse, and is really good at the handy rounds! He loves them.

“It was a nice course,” detailed Alden of the Dean Rheinheimer-set course. “I think he does a really good job with both the Hunter and Jumper courses. I was a little bit late up one line in the first round, so I was a little worried about a lead-change, but he [Curtis Loew] was good. In the handy, I took a couple risks because I knew that Curtis is really good at it. I thought he really stood out in the handy round,” Alden reflected of their second score of 91.

“I love coming here! It’s one of my favorite places,” concluded Alden. “We’ll come more next year than I was able to this year. This show is perfect schooling so that I don’t overdo the horses for an A show next week. I won my very first Grand Prix ever here at Tryon, so it’s a very special place for me. I love it here.”